Even though the game of chess is limited to 64 squares and 32 pieces, there is an apparent infiniteness within that finiteness. It is like the universe which scientifically is finite (Einstein's theory) but for most of us it appears to be infinite. Chess gives us the same variety; it seems to be simple with 64 square occupied by 32 pieces, 16 black and 16 white. But if we look at it deeply, the vastness this game brings out is quite stunning. If every possible move has already been played out, people would still not be playing this game and it would have become boring long ago.

This fascinating game lends itself to an introspection of our life too, which is definitely finite, but gives us the aura of infiniteness. There are many classes of chess players but the ones titled 'World Champions' are far and few in a realm of their own. We can learn life lessons from some of the world champions, which can provide a super solid foundation for our corporate life.

Wilhelm Steinitz (1886–1894) is the first official world champion in the modern era of Chess. There were big names who played this game before him. But I am going to focus on the post Steinitz era between 1886 and 1993, roughly a 100 odd years. If we look at each of these champions and the games that they played, they demonstrated a quality which bore an indelible aspect of their personality. A deep study and reflection of their games reveal the core attributes that made them as champions, which can be fluently and effectively applied to corporate life!

The German world champion Emanuel Lasker (World champion between 1894–1921) who held the number one spot for 27 years was a person who had the "Never say die attitude". He never gave up easily. If we can draw parallel to another modern day sportsperson in another sport, he can be compared to Federer who is still gunning for his 18th Grand slam title. It was because of this attitude, Lasker was almost impossible to beat. Even if he was in a vulnerable position, he would always create problems for his opponents. Lasker had come from the brink of defeat to save his game or even win many a time. On a lighter note, he had a trademark style of playing the game smoking a cigar.

This teaches us the great lesson that even when people have written us off, as long as we are able to delay the inevitable and make that inevitable as avoidable, we can still succeed. This spirit of hope was symbolised by Lasker. 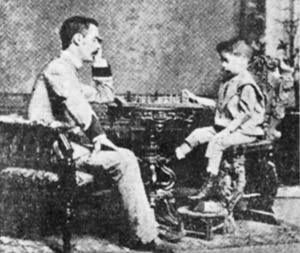 Emanuel Lasker was defeated by José Raúl Capablanca (World champion between 1921-1927). Capablanca was a child prodigy. He started playing the game of chess at the age of 4. He had a clear strategy to play the game. Though, he may not have been as flamboyant as a Tal or Alekhine or Kasparov (World champions after him), he had absolute control over the game as he was clear in his concepts.

He played by the text book. He can be compared to Rahul Dravid of cricket. Bowlers may beat a Sehwag, Sachin or they may even beat Kohli, but it was always difficult to break Dravid's defence. This cool as a cucumber style was exemplified by Capablanca.

Capablanca was dethroned by Alexander Alekhine who was the world champion for 20 years till 1946. Alekhine was a pure genius. Some of the greatest innovative moves in the history of the game have come from Alekhine. He defeated the technically invincible Capablanca with the creative openings he was able to bring forth. He was an assertive player and he could attack right from the word go.

Mikhail Botvinnik was the next big name in the history of the game. He was the first Soviet Union champion. Botvinnik School of chess brought hordes and hordes of Russian youngsters into the chess world including the World champions such as Karpov, Kasparov and Kramnik. He had a scientific approach to chess. He brought science to chess, applied it and taught it. He kept on winning titles and even if he lost his title to someone like Mikhail Tal or Smyslov, he would challenge them again and regain his numero Uno position.

We can learn from him that for all problems in life, there is a scientific and methodical approach to solve the problem. Who would have thought of applying science to the game of Chess? But Botvninik, himself an electrical engineer did that. The metrics approach followed by Botvinnik gave him success. His trademark "adjustment of his glasses" became a fashion statement for many others who wanted to throw a geek look.


(Satya is an International chess player who used to be a contemporary of Viswanathan Anand during the eighties. Stay tuned to read the second part of this blog)

This Blog post claims no credit for any images posted. The image credits to the original source is added.