A century ago there were 100,000 tigers roaming around the forests in the world. In the last 100 years, we have lost 97% of wild tigers. As few as 3,200 exist in the wild today. India is estimated to be home to around 70% of the world's tigers with 2226 tigers in the country as of 2014. Though the number 2226 looks very small, it is actually a big leap from the 1411 tigers that India had in 2006. A lot of measures were taken by the Government to protect Tiger from extinction. 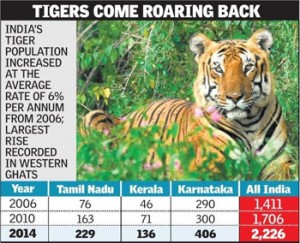 CSS Corp is playing a major role in this tiger revival with its "Care for Paws - Save the Tiger campaign" by donating camera traps to Nagarahole, Dandeli-Anshi Tiger Reserves (DATR) and Bandipur forest. These camera traps have been deployed with the objective of conducting a scientific tiger census, analysing animal behaviour patterns, detecting people's movement in the forest and identifying mischievous activity in the region. These camera traps are keeping the tigers safe from the poachers.

We launched a 45 day long "Save the tiger" awareness program in partnership with Suvarna News 24X7 and Kannada Prabha. Film actor Prakash Raj was the brand ambassador for this campaign. CSS Corp ran a contest for its employees for sharing ideas on Tiger conservation. Goutham Gopal won the contest and he won a trip to BR hills for his ideas. On August 10th 2015, a team from CSS Corp along with Kannada Prabha media channel and Prakash Raj visited the K Gudi wilderness camp to address the the schools, tribal communities & villages around the forest about the importance of Tiger conservation.

This blog post is a narrative of my experience of my visit to K Gudi wilderness camp. It was a 5 hour drive from Bangalore to the K Gudi camp; we reached the camp late in the evening. On the way we spotted deers, barking deers, gaur, elephants & wild boars. It was a thrilling experience to spot the animals in the wild.

The Camp is located in Biligiri Rangana Hill (BR Hill) which is 3500 ft from the sea level. We stayed in a log hut for the night.

On 11th morning, we trekked through the forest and reached Dodda sampige mara (Champak tree in English) which is a 1000 year old tree. Sampige mara is worshipped by solgas – the local tribes in the forest. During the trek, we had interactions with the tribals.

We then visited Ashrama School, run by tribal welfare trust to raise an awareness about wildlife and environment conservation. Prakash Raj was at his energetics best when he interacted with the students and made them to take a pledge to protect tigers.

Our next destination was Gorukana which is a responsible eco-tourism resort, profits made here are funded for bio-diversity conservation. The highlight of this resort is that it does not have any artificial flavours in it. Everything in the resort is a eco-friendly product.

From Gorukana, we went to Chamraja Nagar Girls Higher Secondary School to inculcate the knowledge about tiger conservation and it was well received by the students. The students participated in essay writing competitions and painting competitions, which was overseen by Prakash Raj.

The next activity we had was the wild life safari in open jeeps. Spotting wild animals is not that easy during wild safaris. My colleague Smitha spotted a leopard chased by 4 wild dogs. It was a spine chilling experience- the kind of experience one could see only in movies these days.

Our CEO Tiger Ramesh, who travelled with us had an in-depth understanding of tigers and nature. Tiger shared his wild life experiences with us and showed us some of the photographs he clicked of the tiger in the wild. Those were goose bump moments to see the National animal of India up so close and listening to all the stories that happened while he clicked those pictures.

On 12th August 2015, an award ceremony for the best panchayat that took good initiatives in wildlife protection was conducted at Kolipalaya. Tiger Ramesh, Prakash Raj, Karnataka state Chief conservator of forest were key dignitaries of the event. Prakash Raj again emphasized the need of Tiger and environment conservation.

Those were the best 3 days of my life of staying close with nature, experiencing fresh air and staying far away from the crowded and polluted cosmopolitan city. Before I sign off, I would like to share this picture that is very close to my heart- a picture where I pose along with an acting giant and a Tech giant. 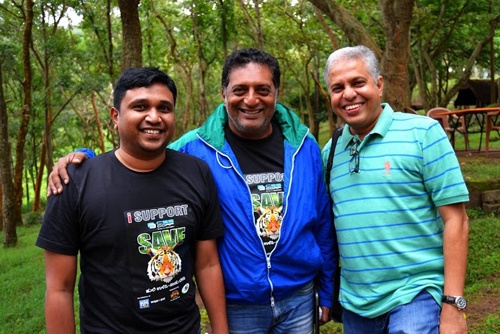 Arun is the Manager – Sustainability of CSS Corp and takes care of the CSR initiatives.