Summer has descended upon the subcontinent.

The cities, towns, plains, and the once salubrious hill stations are heating up.

The days are hot, the nights are still. There is no escape.

It is immutable.Everyone waits for  rain. The Malnad is ready to receive her. 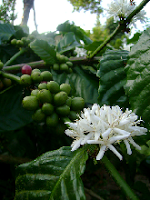 Even the beautiful Coffea Arabica  bud is ready. It awaits Revathi ,the pre-monsoon shower.  Revathi, the giver of life, the nurturer.In the wilderness of the Malnad will Revathi keep her date ? But this year she is late again. Her timely arrival is important. For some its life .For some its business as usual. Her arrival announces that the South West Monsoon is on its way.Her drizzle enhances the coffee bloom .The coffee farmer waits in anticipation.  She brings the Malnad back to life.

This year the temperatures in the Malnad touched 36 degrees  against a normal temperature  of 33-34 degrees Celsius. Apart from this higher than normal temperature, there has been a dry spell of  nearly 5 months in the coffee growing areas that is affecting coffee production. But Revathi did not come. 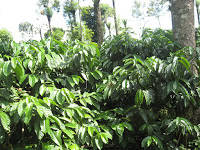 In the year 2009  both Arabica and Robusta suffered losses due to unseasonal heavy rains. Likewise, heavy rains during the blossoming delayed the harvest and lowered crop quality in 2010. There have been periods of drought  In 2002, Karnataka experienced a severe drought for three consecutive years (2001-02, 2002-03 and 2003-04). The IPCC on Climate Change predicts that yields from rain-dependant agriculture could be down by 50% by 2020 . In the Coorg region, some areas have already seen rainfall drop by one-third – from 106 inches per year to 70 inches.

The problem with today’s economy is that we have become obsessed by  the idea of “GDP growth” – which seems to be the single most important measure for success. A green economy is the only sustaining economy – it put values on natural resources, it uses resources sparingly, makes use of its natural capital rather than wasting it and stands committed to environmental protection.Our current GDP models do not recognise the role of natural capital.There is a lot that needs to change. Unless the economic importance of biodiversity and ecosystems, of ecology and forests, not just among economists, but at the level of policy makers, administrators, businesses and the public is understood, the wait for Revathi will get longer.